Roughly a week ago I released an iOS app called Stock Gains. Stock Gains has been a hobby project for the past 6 months and I am very proud of the result.

I'm not an intermediate investor, but I have do sometimes invest my savings in stocks. Partly because I think stock trading is an extremely interesting area and partly because, well, then I simply can't spend the money.

I've used several different (both free and paid) stock- and portfolio apps, but none of them really did it for me. I found that these kind of apps typically fall into one of two categories: Either they are too simple or they are too complex. Besides that, there's a tendency that stock apps for iOS look like, you know... Certainly not all, but many do!

As someone in the field of engineering, the most obvious thing to do is just creating something better yourself. So that's what I decided to do. At first I wanted to create it for personal use only, but soon I realized that I wasn't the only person who didn't like the apps currently on the App Store. In other words: Demand existed.

As mentioned, I've spent 6 months on building the first version of the app. I really wanted to build the best product possible and experiment with what I've learned through the past year working at Trifork as an iOS developer. However, given that I'm still a full-time student, possess a part-time job and live with my significant other, my time for hobby projects has been limited. Combined with being a perfectionist it yields a very long development process.

Being a perfectionist is good, but at some point you have to release. I've refined, refactored and re-designed a million times. Then one day I read a quote (by the founder of Linkedin, I think), which went something like this:

If you are not embarrassed by the first release, you have released too late.

When publishing work, such as an app, you put a piece of yourself out there. That quote made me realize that I was afraid of being embarrassed. Users might like it, enjoy using it. Or they might hate it! This is scary, but also really exciting. I decided to wrap up what I was currently working on and then submit it. There's always a next version! So on tuesday May 13th, Stock Gains version 1.0.1 was finally on the App Store.

One thing that I am particularly happy with is the help and support I have received from competent people around me. This includes feature suggestions and feedback from economists and a professional trader, legal advide from a lawyer, tax insights from an auditor and thorough testing by other software engineers. These extra efforts are what makes Stock Gains a fine app!

From the app's site:

Stock Gains shows you the value of your portfolio. Monitor day-by-day changes and calculate your net gains after taxes, while studying historical data and reading the latest news about your stocks.

This description pretty much sums up the functionality, which is basically what you would expect from these kinds of apps. However, there's one feature that separates if from existing apps: The capital gain calculator.

Usually, stock apps consider current price - acquisition price as the gain (or loss), but in reality taxation applies. Capital gain tax regulations vary from country to country and can be difficult to understand, but in order to get a more precise result, it must be considered. Capital gains calculations are currently supported for US and Danish stocks. More will be added over time. 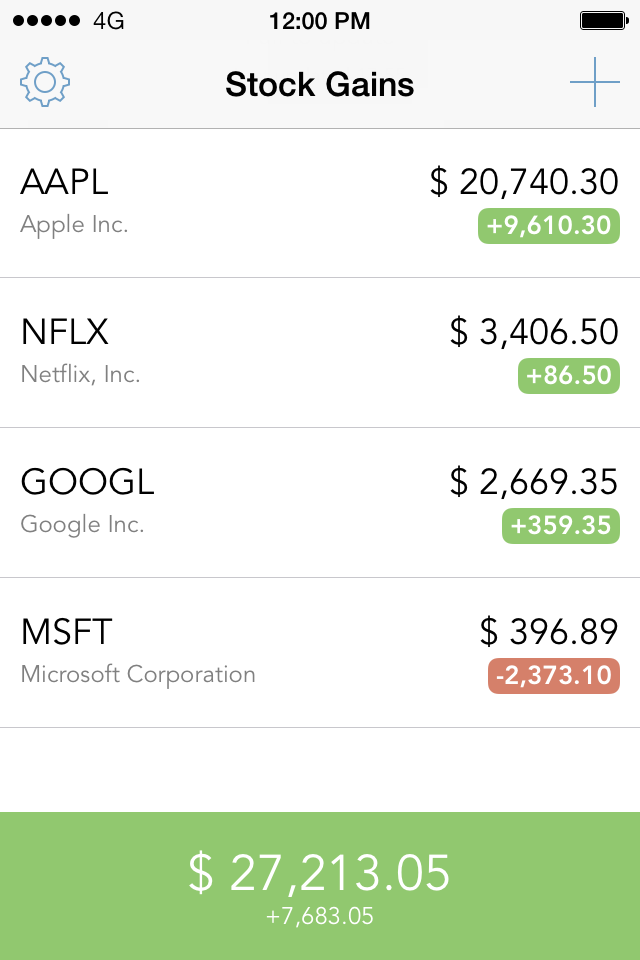