Understanding how a ViewController's view hierarchy is loaded is essential when testing UI related stuff. Consider the following test case, which verifies that an IBOutlet connection to myLabel has been established when a view controller is loaded:

The test will always fail, telling you that vc.myLabel is nil. There is a very good reason for that. Apple's View Controller Programmer Guide for iOS illustrates a view controller's loading and unloading sequence with the following diagram:

It is described as follows:

Now, as opposed to before, the test passes, because the view controller loads the view hierarchy into memory and stores it in its view property 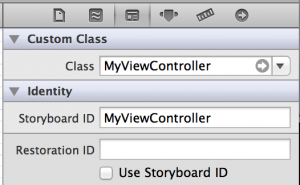 Now, when initializing MyViewController from test code, follow this pattern to load it programmatically (where Storyboard is the name of the containing storyboard file):

With this approach you don't have to invoke the view property, since the view hierarchy has already been loaded into memory at this time.